Concept artwork for the GRAC exterior.

The $57 million Gippsland Regional Aquatic Centre (GRAC) is the centrepiece of the Latrobe Valley Authority’s $85 million sports and infrastructure package.

It will allow Latrobe City Council to fulfil its long held desire for a facility of this type for its constituents.

The centre will feature a range of facilities for competitive swimming, leisure, general community use and major regional events, including an eight lane 50 metre indoor swimming pool with 500 spectator seats. The GRAC will also include:

On top of $46 million in State Government funding, an additional $8 million has been loaned to Latrobe City Council from Sport and Recreation Victoria’s Community Sports Infrastructure loan scheme to ensure all desired components of the project are included.

This, combined with a contribution of up to $3 million from LCC, meant the 25 metre outdoor pool, geothermal infrastructure and water slides could be included in the final scope of the project.

This project has strong community support, and was designed in consultation with local residents, key user groups and stakeholders. ADCO Constructions is on site and work has begun on the GRAC. Site levelling was the first step. The foundation and structural base forming.

The Gippsland Regional Aquatic Centre is coming along swimmingly and is on track to open in early 2021. Inside works are well underway including plastering, painting and tiling.

All of the centre’s five pools have now been installed with internal concourses poured and screeding and drainage being installed prior to floor tiling.

The outdoor 25m pool pipework has gone in and surrounding works are continuing. Glazing installation is continuing with works undertaken by Morwell Shop Fitters.

The large internal aqua play zone is being constructed and will, no doubt, provide hours of entertainment. Road installation is occurring to the west of the centre with works by local company, Fowlers Asphalting.

The aqua play area under construction.

The slide tower to the east of the centre can be seen from afar and once complete, will be clad in polycarbonate sheeting.

Other local contractors working on the project include:

There are several other local suppliers and smaller contractors who are also involved in the project.

Once complete the Gippsland Regional Aquatic Centre will include:

Council worked with key stakeholders including Swimming Victoria to refine the scope of the aquatics components along with a nine-person Project Reference Group (PRG), taking inspiration and learnings from comparable centres across the state.

Feedback from community consultation was utilised in developing plans, with the Latrobe City community highlighting an indoor warm water pool, spa and sauna as the top priorities beyond a 50 metre indoor pool with seating.

The Industry Capability Network and GROW Gippsland have been engaged extensively in order to maximise local content on the project and have assisted with the tendering process.

The PRG will continue to act as a key conduit between Council and community in the planning and delivery of the GRAC. The production bore neighbouring the GRAC is working well.

Designed to have a strong sustainability focus, the Gippsland Regional Aquatic Centre will be the first public aquatic facility in Victoria to incorporate a geothermal heating system.

The system taps in to the aquifer below ground in Traralgon at a depth of more than 600 metres where the ground water is about 65 degrees Celsius.

The heat energy from the water is taken off via a heat exchanger and the cooled water is reinjected back down into the aquifer at about 40 degrees.

The production & injection bores are now complete and testing has confirmed that the bores function well.

Drilling for the geothermal heating project was undertaken by local company Drilltec.

The geothermal pipeline has been installed and mechanical implementation works are being undertaken by Laser Plumbing and AusGeothermal from Traralgon.

Click here for a video exploring the geothermal system: https://www.youtube.com/watch?v=8MZkOzvgYOI 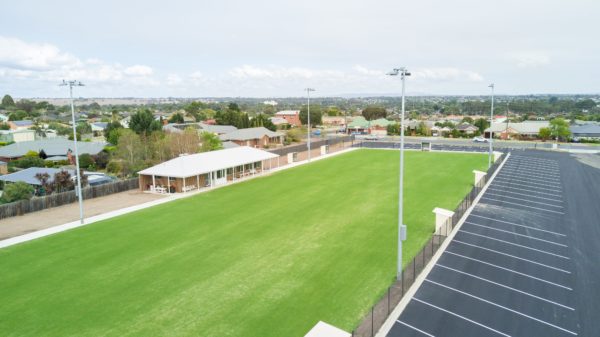 The grass is greener for the Traralgon Croquet Club (TCC) on the other side of a move to the Glenview Park sporting precinct.

An agreement was reached between Latrobe City Council and TCC to develop a new croquet facility alongside the Traralgon Greyhound Racing Club and Latrobe Valley Racing Club at McNairn Road.

The previous Breed Street centre was more than 60 years old and had limited capacity to host large events and simultaneous play. Construction is now complete and the new facility is in use by the club, with an official opening staged on 10 July.

The former croquet club site will be utilised as part of the GRAC development.