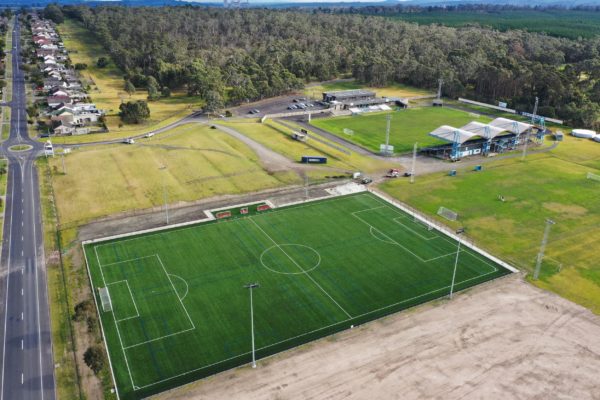 It is proposed the Latrobe City Sports and Entertainment Stadium will become the centre of excellence for football (soccer) in Gippsland – providing a pathway for promising young athletes to elite sport through Gippsland FC and other high performance programs.

Works included upgrades of current grass pitches and construction of a synthetic pitch with lighting.

Upgrades to grandstands, change rooms and club rooms are also being considered in line with future potential funding opportunities.

The full size FIFA accredited synthetic pitch has been installed by Turf One and is already being enjoyed by local and regional clubs.

An official opening was held on 10 July, 2019 with representatives from Football Federation Victoria, Latrobe Valley Soccer League, Gippsland FC and a range of local stakeholders joining with Latrobe City Council and Latrobe Valley Authority to kick off a new era for the site.

The new pitch provides for 11-a-side, nine-a-side and seven-a-side soccer as well as multi-purpose usage.

Highlights of this project included:

The synthetic field was the first phase of a longer term overhaul of the iconic Latrobe Valley facility in line with Latrobe City Council’s master plan for the site. In 2017 Council purchased the facility back from its private owners to ensure it is developed and used as a community asset and immediate works were completed to bring the change rooms up to quality and safety standard for major events.

Melbourne Victory has since utilised the facility for A-League pre-season and W-League in-season games.

Community consultation is continuing with user groups and a project manager for major recreation projects has been appointed to oversee the stadium’s redevelopment.

Council has worked with FFV and governing bodies to determine the requirements for Centre of Excellence status and to refine the parameters for development pathways.

A Project Reference Group consisting of a range of local stakeholders is continuing to guide the project.